HALIFAX, NS TO CHESTER, NS ON "HIPNAUTICAL",
A GRAMPIAN 7.9 DISCOVERY

Well, the time was upon us. After a late night discussion of attending Chester Yacht Club’s Race week and figuring out where to sleep for that week, my race buddies at Dartmouth Yacht Club came up with the idea of bringing old Hipnautical and setting an anchor and rafting up with Daydreamer, a Benateau 28.5 First racer/cruiser. We would race Daydreamer during the day, and “relax  on Hip every night, and save $$ by sleeping on the 2 boats.

I had done the journey from Halifax Harbour to Mahone Bay numerous times in the last 15 years as crew and even as captain, but never on my own boat. The trip is about 50 nautical miles, and I can remember doing my first trip without a GPS, just our old charts.  Of course, there is always that distancing when you crew in that one can always say”she ain’t my boat” if anything bad happens. I was nervous about bringing my own boat since I would have none of that aloofness available this time!

The first order of business was to make sure old Hip was sea ready. Banging around the buoys in Bedford Basin was one thing, going offshore was another! I contacted my Transport Canada Power/Sail Squadron member Mary Ridgewell, and she inspected Hip and pronounced her ready and equipped. I had my harness, my fire extinguisher, my VHF Radio certification, my 2 GPS units, my charts, my old log books from previous journeys,  and lots of PFDs . Since I was not going more than 10 miles offshore, an EPIRB was not a requirement. A better anchor was a necessity however, as we planned to be anchored for a whole week and my little Danforth was not sufficient. I got a 35 pound Danforth from a club member, along with 200 ft of rope and 18 ft of chain. Now to equip her with provisions, and we were ready!

The day we were to leave I got my crew Chris and Alex together. The 2 are excellent sailors in their own ways, but they did not get along 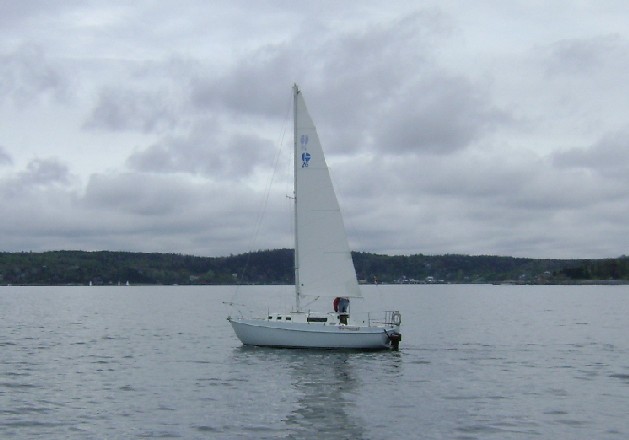 too well…more on that later.  We had flat calm in the basin, so we put the 9.9 HP Merc outboard on and putted out to sea at about 6 knots.  Under the McKay Bridge, into the Narrows, under the MacDonald Bridge, dodging the ferry, past Georges Island, and still no wind to be found.  We had our breakfast (go McDonald Breakfast sandwiches) and were getting fidgety with the sails….so put up the main at least I said to my crew. Up went my 2008 mainsail, nice and crisp and the correct size (Eric Koppernaes of UKSails in Dartmouth built it and laughed when he saw my too small original sail). Just as we got the main up and felt a wee breeze fill it, the VHF crackled to life…”HMCS Charlottetown putting to sea for live fire exercises, mariners be aware”.  I looked astern and saw the same Navy vessel bearing down on us.  No biggie, just ease to port I thought. Well she followed us….hard to starboard then boys…nope, now she is going starboard…..well my love for our Navy was being tested, so I ducked under Georges to give her way. Big Boat Rule in effect I guess!

After bouncing in her wake, I followed Charlottetown out to sea!   Man she was going fast, at least 20 knots. She quickly left us in her wake. Up went the old 135 Genoa, wrinkled and blown out, but still drawing wind.  The Merc was throttled down and we bobbed along at about 4 knots with wind and motor. The sea was beginning to swell as we got farther away from the protected harbour. As captain, I also took responsibility for navigating, so I would go below and check our position on my Garmin GPS and plot it on my chart. I was quite confident in my navigating, so I decided to take the “shortcut” through the Sambro Ledges. It saves about 10 miles, but the route is between some nasty shoals and in places only about 200 meters wide, little room for error. Of course, just as I set the course for the ledges, in comes the fog. This allowed for a bit of excitement, and I was plotting every 5 minutes so as to maintain my bearings. Sure enough, as I would shout out from the cabin to Chris the helmsman, he would reply that yes he did see HE2 off the port bow(or whatever mark we were looking for). This greatly increased my confidence, and I even told Chris and Alex that the worst was behind us!

The Charlottetown began transmitting on VHF C 16 to warn of the live fire exercise and I noticed that we were only about 3 miles away.  After some discussion amongst the crew, we figured it would be best if we hugged the shore in the fog, since the Canadian Navy usually did not send live rounds at the coast. At this point I thought it would be good to give the crew a wee libation to steady the nerves, however in retrospect that may have been erroneous.  I had Chris and Alex spelling each other at the helm, and I noticed that Alex was having a tougher time keeping Hip on her course than Chris (Chris being older than Alex). The two began to bicker over proper course and I should have put my foot done and taken over the helm duties, but as we were coming out of the fog, I thought it best that I keep doing visual and GPS checks and leave the steering to them.

As the morning changed to the afternoon, we began to turn into Mahone Bay and the wind increased enough to let us turn off the Merc and run with the wind. As we passed Tancook Island, I was so excited to see Hip rolling along as if she didn’t have a care in the world. Those libations were keeping everyone in better cheer so everything was just peachy. As we made our way into Chester harbour, we began to get ready to dock at Chester Yacht Club.  We went into the club where I was quite impressed with myself and let everyone know about it at the bar. We found out that I could set an anchor to the southwest of the mooring field and the club tender could get us service back to the club dock. So off we went.

Now, as we searched for a place to lay anchor, I must confess something…I had never set an anchor before. I had become quite proficient at getting Hip into a dock and I could approach a mooring in all kinds of weather but I had never any reason to set an anchor. I was told the water depth was about 16 ft where I wanted to set the anchor (no depth sounder). So using my great math, I figured 4:1 meant about 90 ft of rode. Now Chris and Alex began to bicker about this, with Alex recommending about 150 ft of rode. Chris angrily pointed out that we could end up swinging into another vessel with that much rode…and I concurred.  Alex bit his tongue and we set the rode at 90 ft.  Toot toot on the air horn, on to the yacht club tender, and back to Halifax in my friend’s pickup.

So this should be the end of the story, right? I wish it was.  I was leaving the Hip on anchor for the weekend, and Daydreamer was coming into Chester for Saturday. On Saturday morning I took a Yahoo motorboat into Chester from Lunenburg and as we pulled into the harbour I looked for my NS flag flying from Hip’s mast.  Hmmmmm, no flag….hmmmmmmm no HIP!!!!! The feeling of nausea and bile rose up in my throat. Where was she? I searched the shore, hoping and not hoping to see her, if you know what I mean.  The yahoo throttled down and my friend realized we had no clue where she was. But at last, on the southeast side of the mooring field I saw my NS flag! Off we went, and as we went through the mooring field I was looking at all the yachts and trying to figure out which ones Hip had hit. Every scrape and dent on every hull I thought was my fault. At last we were next to my baby, where she was moored with her anchor and rode on top of her bow. She seemed fine…so off to the club to see what happened.

Into the bar I slunk, not quite with the same braggadocio as the last time. I asked at the bar about her and was greeted with an icy stare. “You!!” said the bartender and I was suitably chastened. I found the tender operator who eased my concerns by zipping me out to Hip while telling of him watching her slide through the mooring field at a whopping half knot as she pulled her anchor. The depth where she was first anchored was not 16 ft, but 45 feet! My 90 ft of rode was nothing, so she floated away. The tender crew placed her on a mooring and had a good chuckle over the Dartmouth Yacht Club “city boy”. Let me tell you, I put out all 200 feet of rode when I reset her.

As well, DYC seemed to find out about my “prowess” in record time. I still endure ribbing from my sailor friends at both clubs. Oh well, lesson learned!

Now this doesn’t even begin to tell about the fun I had double handed racing her in an ocean race or even the return trip to DYC. That will have to wait til next time!